This past weekend I built another game for Ludum Dare. For those unfamiliar, Ludum Dare is a contest where you have 48 hours to build a game from scratch. The theme this time was “A Small World”. I targeted the NES using my C Boilerplate library for the NES. As usual, it is tested and works on real hardware.

It’s a top-down action game featuring a frog in world with missing pieces. Your goal: to collect the missing pieces and restore your world.

Give it a try 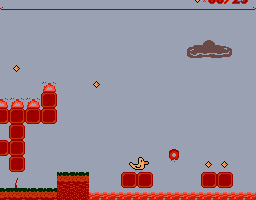 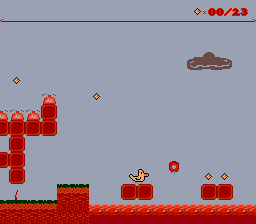 END_OF_DOCUMENT_TOKEN_TO_BE_REPLACED

Make a Gameboy Game without writing any code!

If you grew up with the Gameboy, you might have wanted to make games for it when you were a kid. Thanks to the power of the modern internet, this is now something you can really do!

ClassicGB is a simple game maker that allows you to use your own assets (or some readily available under Creative Commons) to design a simple top-down adventure game.

The games built will be very simple in nature, however full source code of games is available, so you can expand these yourself. This could be a great starting point for a personal project, or a Game Jam entry. (Make sure the rules of the jam allow for source code generators, though!)

Best of all, it’s free and always will be!

If this sounds interesting at all to you, head over to game-builder.cpprograms.net to give it a try!

Please report any bugs to me via email or Twitter. 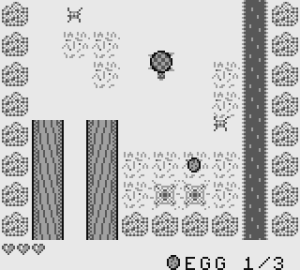 This past weekend I spent some time writing a game! Squishy the Turtle is a Nintendo Game Boy game written for Ludum Dare 34 over the course of 48 hours. It follows the adventures of Squishy the Turtle, who must collect eggs to advance through the world. Squishy can grow and shrink in order to better navigate the world. A post on the arcade machine I’ve brought back to life is now available. I’ve got some details about the basic setup, but if you’ve got any questions about it, feel free to ask. I wasn’t really sure what else to put down.

I’ve also found a little time to re-upload an old mod I made for Garry’s Mod back in the days of the toybox. It’s a silly weapon that fires baby dolls at people. For whatever reason it got some huge fanfare back when I made it in college. It seems to have found a small following again, as well. If you want it, here it is.

Hey folks, and welcome to the new cpprograms.net. I’ve moved the site off of my custom CMS and onto WordPress – let me know if you see anything missing. My old CMS is not bad, but it has really been completely eclipsed in features and would need a rewrite to get it back up to date. There are simply better tools out there nowadays. It will still be available on the site, but I’ll no longer be actively maintaining it. The site should still be mostly the same to navigate, and all existing file links should be properly redirected.

I haven’t really added anything new to the site, but I’m always tinkering with something; be it a minecraft plugin, a new website idea, or sometimes more hardware-centric projects. (Expect a post about an Arcade cabinet in the near future) I’m going to try to use this site more actively again as time goes on, but based on the past, I can’t make any promises.

(And yes, we lost all of the old news. Not like there was that much in there. Old site is at old.cpprograms.net if you need it.)