First, what worked: a lot. My time management definitely held out well – I actually found myself completing every last one of my stretch goals for the first time ever. I feel I’m getting close to mastering my toolset as well, giving me more time for the game itself. I spent a bit more time on polishing the look and feel of this game than prior ones – especially adding scrolling animations between screens. This was the absolute last thing I did, and it drew a lot of positive comments. I think I have neglected those little polish details a lot in the past, and this entry really showed me how much that stuff matters! I will have to prioritize some of that stuff sooner. (Plus, now I have an example for scrolling to work off of.)

I also feel like my artwork is getting better. It could always improve, but the bunny actually looked like a bunny, and the enemies weren’t too bad. Lastly, I think I really nailed down level design well this time – I was able to devote more time to it this time, and it seemed to show through. For a first puzzle game, (ever, actually!) I think this fared really well. Lastly, I switched to an html5/js based emulator this time, instead of flash-based. This was likely more accessible for players, and in addition it has less issues with lag/etc so it probably gave a much better first impression.

Of course, in anything like this there’s plenty of room for improvement. That falls into a few categories for me.

First, movement/mechanics. This was my first puzzle game, so I guess it shouldn’t be a surprise, but the enemy movement wasn’t very clear. A number of people just gave up on the game because they couldn’t figure out how enemies would move. I’m still struggling to figure out how I could have made it clearer. One idea might be to precompute what direction the enemy will move in next turn, and have the sprite aimed in that direction. (Doesn’t work for the ball enemies, of course…)

Additionally, the color of tiles threw a few players off – many players assumed that the color of the tiles meant something. (It didn’t!) I think I could have helped this by tweaking the first level’s design a bit, so that the player walks over both types of tile at the same speed before picking up a gem. That could have helped explain movement in general, too. I also could include an in-game screen with a short explanation of the mechanics – that could help for players that didn’t read the Ludum Dare page. In this case, I’d have pointed out the following:

Second, music/sound effects. I will say this entry was one of my strongest ones for them – the music actually got a few compliments. (Not a common occurrence for me.) That said, the main track could have been a bit longer – it got repetitive pretty fast, and was very few measures. I also think it would have made a big difference to not restart the music at the start of every level – that was kind of jarring, and likely made the repetitive nature of the music worse. Finally, it really would have helped if I could have squeezed out at least one more track to switch to after a few levels, just to break the repetitiveness a bit more.

Lastly, there are a few features that would be nice to have for next time:

I was really happy with the results of this jam, and I’m definitely excited for the next one. I think if I can improve on the things I listed above, the results will be one of the best games I’ve made. 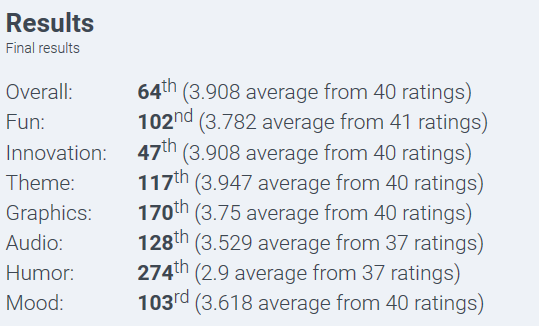 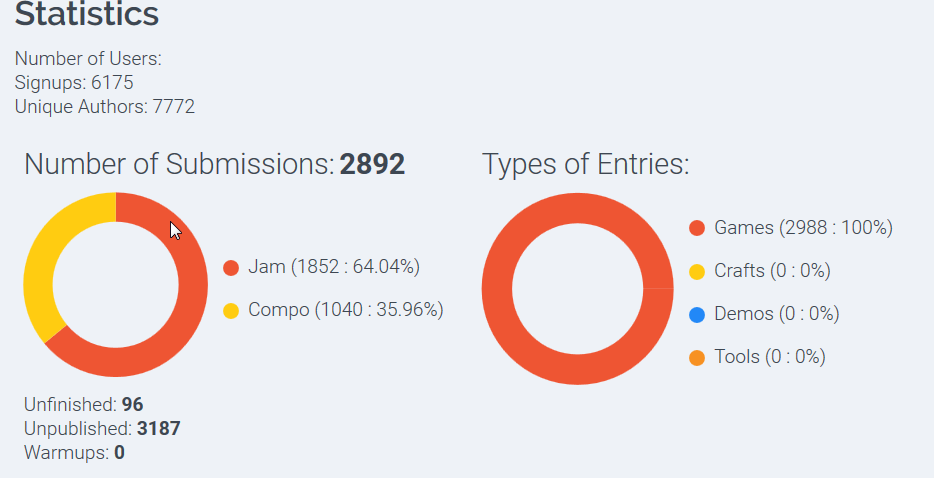